Welcome to the Casina Los Geevas - the hottest, coolest casino hosting the most high stakes HoverDice tournament this side of the sector!

Beat four contestants in HoverDice battles, take their special dice for your own, and climb to the top*!

Controls: Just use the mouse to click/tap on the screen to play!

Here's how the phases of a HoverDice battle works:

1. Setup - Choose your special dice to show up during the shooting phase

2. Shoot - Dice are tossed into the air and it's a free for all between you and your opponent to shoot the dice and claim as many as you can. You can shoot rolling dice or dice that your opponent has already claimed to take them for yourself!

3. Assign - Strategically assign dice to attack or defend with. All the dice with dots on them are yours, and the blank ones are your opponent's. All your dice start off as attack dice, click on them again to toggle between attack and defense.

4. Battle - Clash with your opponent to deal damage to them and come one step closer to victory! Defense guards against attack, lowering or completely stopping the attack if the defense is higher.

*You will be stuck at the top sorry.

Hi folks! Thanks for checking out our game. We made it in 48 hours for the GMTK Game Jam 2022, and it's a bit unpolished so here's some important info that we didn't have time to put into the game.

Special dice don't have very good feedback when they occur, apologies for that. Both you and your opponent add two special dice into the arena (besides the first enemy). Here's some descriptions of how the effects work.

Amazing game for 48 hours! Waiting for the day it becomes full! 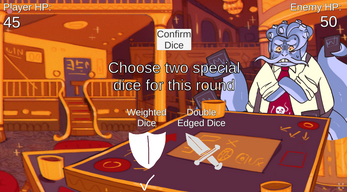 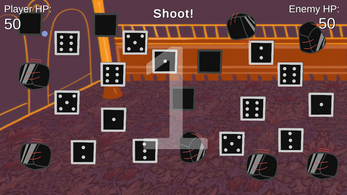 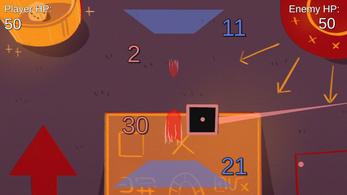 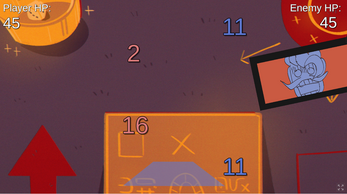