Howdy y'all, it's Hawky here! So, it's been a week since me and Col published Lookouts and I wanted to reflect a little on the game's development, what's happened since release, and what we're planning for the future.

We made Lookouts in about a day and half on the weekend after Col's birthday. He was visiting and staying with me for a week and we saw that the Gay Western Jam was on much earlier in the week, so we were like "Oh, that could be fun to do", but we had other stuff planned for the rest of the time. We woke up late on Saturday, and since he was leaving on Sunday, we decided to just chill and make something for the jam. If I'm honest I don't really remember where the exact idea for Lookouts came from; I had more grandiose ideas before I talked about anything with Col but I knew I wanted something personal and intimate. I've loved Western-themed stuff for a long time so it was super up my alley and fun being able to lean into that with the writing. Because we were both in the same space with each other talking about stuff I don't really have any messages during that time of discussion, all I really remember about the story deliberation was being like "They should both be trans masc" and we were like Fuck Yeah.

We basically just sat down and worked on our own thing for about first half of the development time, me making a really simple visual novel system in Unity while Col drew the two main characters who look absolutely rad as fuck because Col's art is so so gooooooood. His designs were really key to my writing as well because it's something I can use to to fill in physical descriptions, borrowing from what you can see and pointing things out while filling in and expanding upon details and ambiguities that can't be shown.

After a few hours when we had the main character designs and some of their emotes done and the visual novel system was taking shape we took a break when our pizza arrived and watched some YouTube and stuff. I think that's what I enjoyed the most about making Lookouts. We had zero expectations or stress, the deadline wasn't a big deal and we didn't really need to think about it because we were just making something small and chilling with each other. When we got back to work Col continued with the emotes (he did way more of them than I was expecting I didn't even give him a guideline he just went hogwild and they're all so good i love him sm) and I started writing the story outline so we knew what we were working with overall.

Skipping ahead to later I realised that the plan I had made was pretty ambitious which I sorta knew but I actually looked at it and was like "Wait no", so for the jam version we cut maybe like 50-60% of what was planned? Boiled it down to just the most important part which was the meeting, basically. Then I went and started actually writing what we needed, I think the intro part at the beginning I wrote directly into Unity because it was so short and I wanted to test my dialogue system worked, and then the rest of it I wrote into an Excel document and then copy pasted the lines in. At about maybe 4 in the morning my neck was killing me so I laid down and me and him just took a break and watched more dumb YouTube vids to chill.

We worked a couple hours after that and by the time we went to sleep at around 6am the game had a lot done. We got up in the afternoon again and worked a bit more on it, me writing the end part and bug fixing, while Col bless his soul drew some characters that didn't get a chance to appear in the game (yet!!!). When Col had to leave in the evening the game was basically done, I only worked on it a little bit after and during the week when the deadline got extended for the jam, connecting all the dialogue together and polishing a couple bits. I'd say we worked on it for about a day and a half but less than 24 hours in actual working hours I think? Again this is a very hazy timeline as it was almost two weeks ago and we were sorta tired and chilling and sleeping at weird times and oh my Lord Helix so much has happened since we uploaded.

To use the common parlance, Lookouts kinda bload up, at least by the yard stick we were using to measure it. I was expecting maybe a few dozen views or whatever after we released, and considering how quickly I'd wrote the story and that it was more or less a first draft I was expecting pretty much no actual response from people. We were wrong in the most wonderful way.

People have been so incredibly fucking nice about Lookouts I don't even have words. The 7 days since we published has been one exciting joyous thing to scream at each other over after another. On the list of unexpected and exciting things includes:

We're truly, truly blown away by the response and how much people have resonated with this game we made. I can't thank you all enough, all of you, if you sent a message or a rating or interacted with the game in any way thank you so so much, from the bottom of our hearts. This week has been exhausting in the best way possible.

So that 50-60% I mentioned we cut for the jam, we're still planning on doing that and continuing the story of Lookouts from where the jam version leaves off, as well as fleshing out what's already there. The overwhelmingly positive response made me a bit nervous at first about adding stuff but lots of people have also said they want to see where it goes and want to see a happy ending for these boys, and that's what we plan on doing. I don't have a timeframe for when you should expect this, obviously sometime next year, preferably in the first quarter of the year lol. We're both super super excited about working on the project and using the stuff we had to cut so don't worry about our enthusiasm, but obviously work/school/life gets in the way so I have no deadlines or date announcements to share on that front.

Yeah, so. Pretty wet and wild, pretty cool, a lot of interesting and exciting stuff happened, and is going to happen hopefully! Again thank you all so much for the response, it surpassed our expectations in ways I could only joke about before now. Make sure to follow us on twitter where we're most active if you want updates about Lookouts when we have them (but mostly the usual fair of memes and art and just normal tweets tbh).

See ya around partners 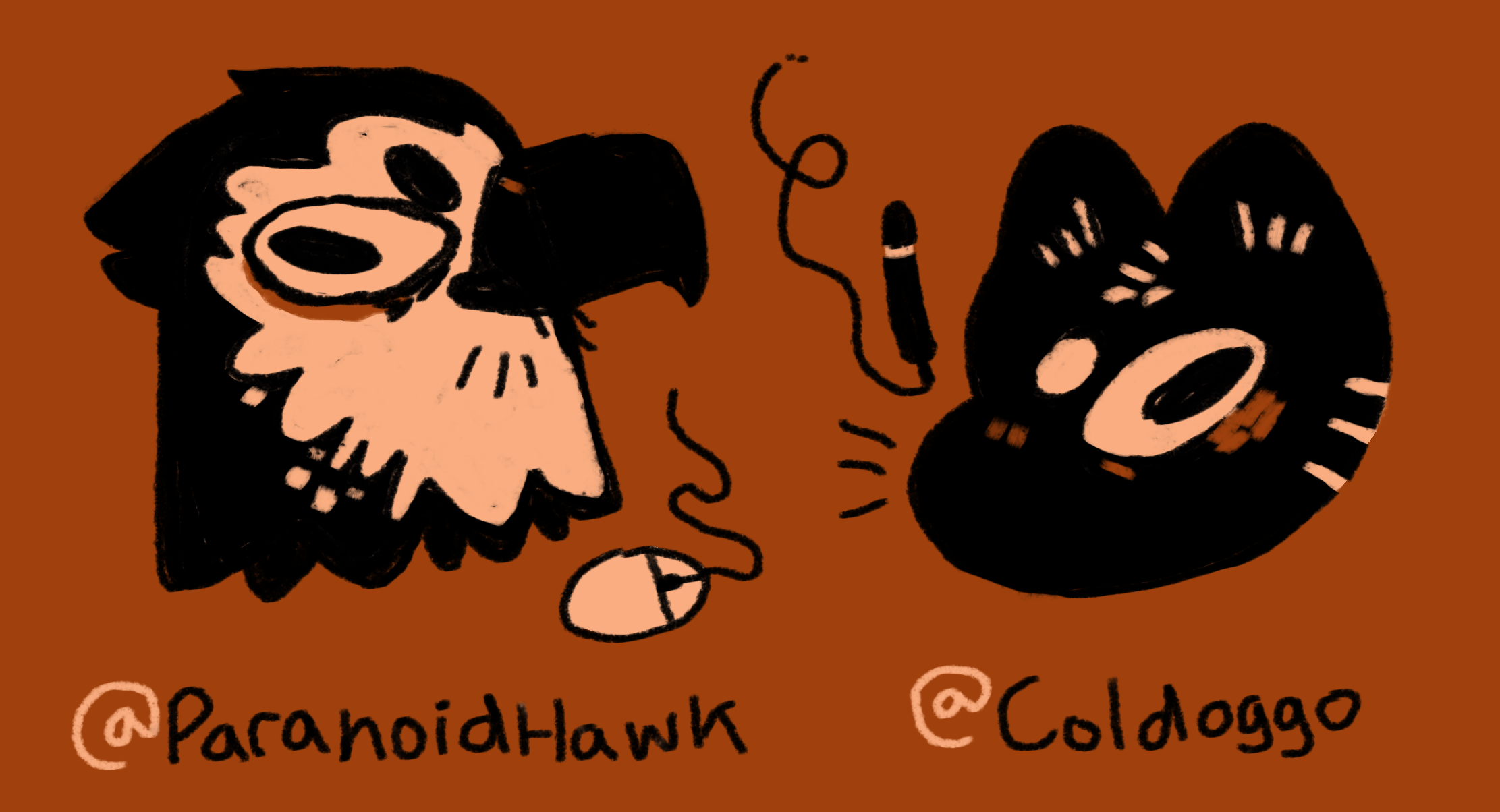 I love this guys.

Excited to see the fruition of whats in the pipeline in the future! GJ!

I loved the game so I'm happy to hear ya'll plan on continuing it, keep up the great work!